Below are some of my private collection cars, each having a special meaning to me. Some of the cars were restored by us and some were purchased in completed condition with only minor work being done by us to bring them up to our standards.

As you will see, I specialize in cars from the 60’s and 70’s muscle car era. I have always tried to acquire cars that were built with the largest engines available and original equipment powertrains as they appreciate above normal market conditions.

Look for the tabs on the left to see additional information and pictures of each individual car and the steps that were taken to restore it to its current condition. 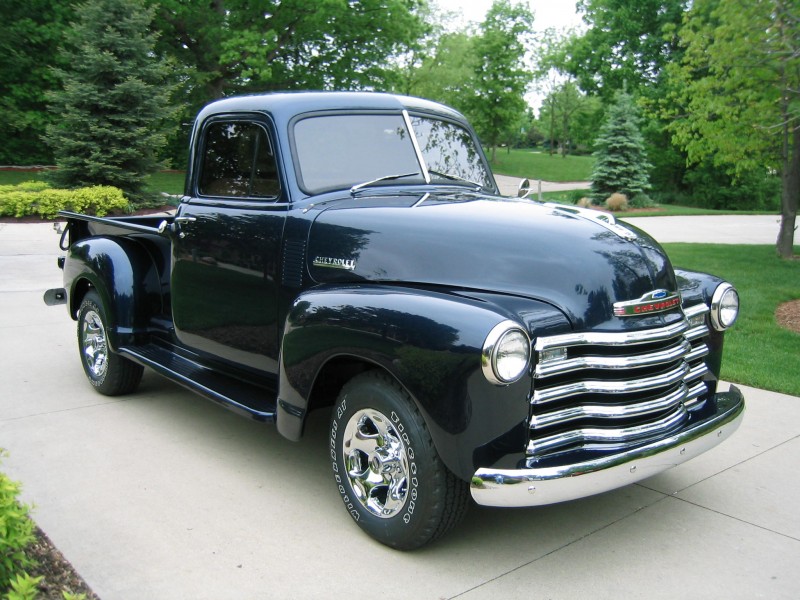 This truck is the vehicle that started the Restoration business we now operate. I had no idea when we started this father and son project, that it would lead us down a path and end up where it has today.

The satisfaction this project gave us was truly amazing. Yes it was a lot of late hours and hard work, but well worth it in the end. When this project was completed out painter and bodyman that worked on this truck took it to a car show and won “Best Paint of Show”. Thereby vaidating what we already felt, this was a truly amazing result that everyone could be proud of.

The truck went from a tired old pickup toa mere, bare frame laying in the parking lot. Every nut & bolt was removed from this project and everything was restored to original factory appearance with the exception of the tires and wheels. I am truly proud of the results and the knowledge we gained in doing this truck. It was and will be very special for as long as I own it.

This Corvette came from Arizona and it is a horsepower monster. A huge 427 Cu In engine coupled up to a 4 speed manual transmission puts plenty of power to the road. It was built as a radio delete, manual brake and manual steering car. The only visible options are the knock off wheels, the side pipe exhaust system and the black leather interior. This completely matching numbers car is a great example of the mid-sixties production muscle cars.

This car was built by GM for one main purpose, to go fast and make plenty of noise doing it. Really does both of those things well.

The car was in great shape when I bought it and all I really did was to install a new battery, a new black soft top and bring the maintenance and repair items up to date. Corvettes have had a long production run and will continue well into the future.

The collectibility of the 63-67 mid year corvettes continues to increase every year with fewer and fewer left on the road all the time. When these cars were new, they were often pushed behind the barn if the engine was blown up or if the body sustained considerable damage. Well not any more. 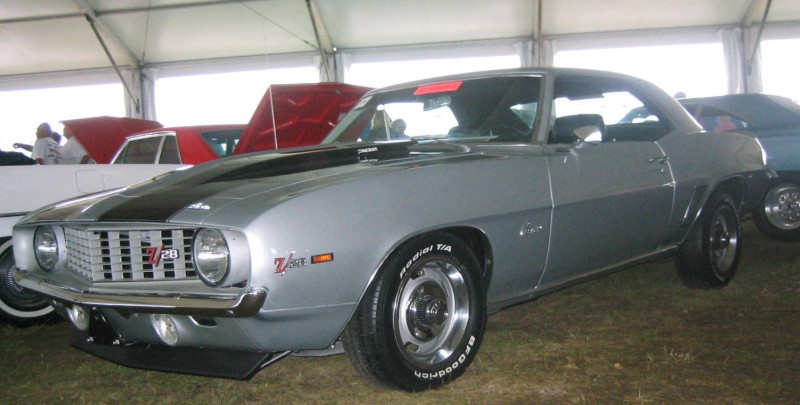 As you can see from the photos, this 1969 Chevrolet Z28 was purchased at the Kruse Auction Park in Auburn, Indiana during the Memorial Day auction event. This car is a matching numbers example and was one of the first to cross the block during the event. I was able to buy the car at well below market price as it seemed that prospective bidders were watching to see what it brought and to get a feel for the market. Another similar car crossed the block some 10 cars afterwards and sold for $10,000 more than I was able to buy this one for. Although the car was nor perfect and needed some detail work, it was a great buy.

I removed the engine, resealed and repainted the engine as well as the underhoood area and gave the car a whole new life. It now looks as good or better than it did when it was new. The only incorrect item on the car is the dual performance exhaust system that breaths a little better than the factory installed equipment.

Although 1967 through 1969 Camaros are plentiful, they are still a stable car in the muscle car market place and their popularity continues to have a strong foot hold with Collectors. These cars have held up well in the past and I think they will be great investments for the future. As always, matching numbers, documentation and big engines rule.

1969 was the last year for this body style and continues to be one of the most desireable Camaros ever. This car was purchased in pristine condition and we had to do virtually nothing to it. Equipted with a 396 Cu In engine, an automatic transmission, power steering, power brakes, air conditioning, tilt wheel power windows and much more, this SS/RS convertible is every mans dream.

Highly responsive and fun to drive, the Daytona Yellow paint is set off nicely with the black stripes, rally wheels and signiture blackout front and rear paint treatments. Top up or top down it draws attention wherever it goes and is a great addition to my collection. 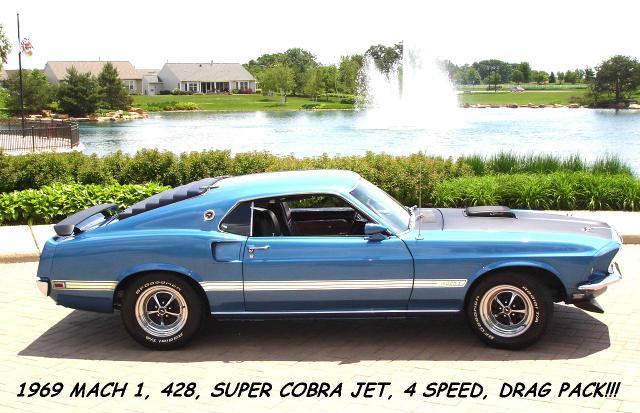 This is the mother of all mothers when it comes to 60’s muscle cars. Ford built a huge volume of Mustangs during the 60’s and 70’s. They competed head to head with the Chevrolet Camaro on and off the track. This car was originally invoiced to the Ford Motor Sales Division to be used as a promotional display car. When I purchased the car I was able to get the build sheet, original window sticker, a copy of the factory invoice and a full Marti report.

This car was born a true 428 Cu In Super Cobra Jet with the optional Drag Pak package giving it a 4.30 to 1 rear axle ratio. That’ll put some starch in your shorts. Built for straight line, brute acceleration this is a car that loves to go. Its distinctive sound and feel are not matched by anything else I’ve driven. The factory color and Mach I package make it rather unique and it is always a favorite with visitor to our shop.

Virtually no work had to be performed on this show ready example and we get it out in the summer months to give it a little exercise. Boy the looks you get from people of all ages when they see this little peice of automotive history. 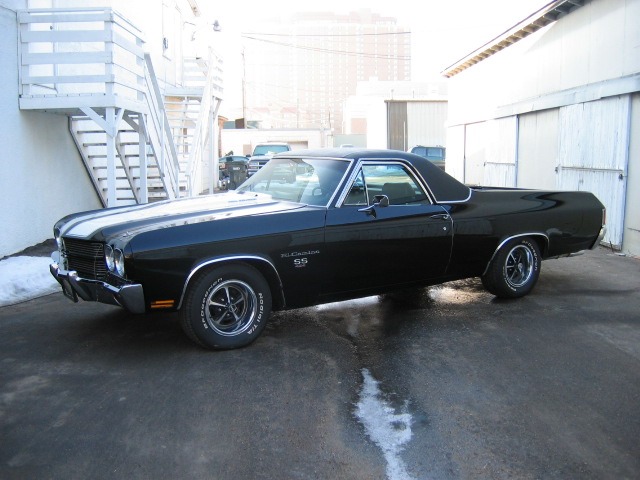 Here’s a car almost every female I know hates and almost every guy I know loves. Everyone wanted a 1970 El  Camino back in the day. This one is rather unique in that it is an SS model with a 454 Cu In engine. The engine is not original as it has a GM Crate Motor installed giving it better modern day reliability.

What you see is pretty much the way I bought it with only minor repairs and sorting to make it a good daily driver. This El Camino is equiped with an automatic transmission, power steering, power brakes, tilt wheel, buslt seats, console and air conditioning.

Notice the fresh air induction door that is on the rear of the hood, when you step on the gas hard, the door opens bring fresh cold air into the engine and increasing the fuel load. MORE HORSEPOWER!! I can’t get any of my kids or spouse to ride with me in it, but that’s OK I guess, it really was for me anyways. 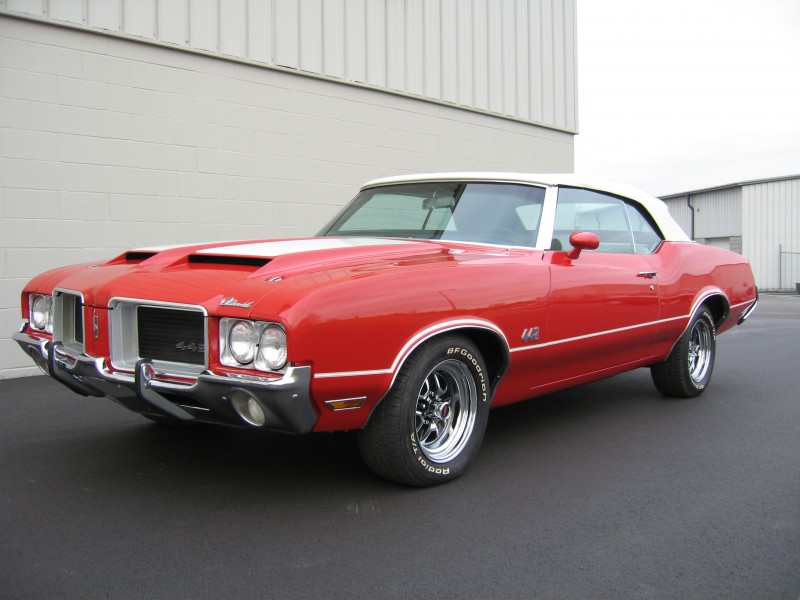 This was the first car I purchased for what has become my own little collection of cars. In 1982, I was looking for a Oldsmobile 442 convertible and happened upon this car and purchased it from a private owner. The car need lots of work and I proceded to have our Body Shop tear it down, strip off all the old paint and apply a fresh coat of Laquer paint.

I replaced the top, interior and trim items in need and put new tires and wheels on it. Some 25 years later, I had the engine completely rebuilt, balanced and blueprinted. Many new hotter than stock parts went into the rebuild and the horsepower increased tremendeously. The list of improvements is way too long to list, but let’s just say “It’s not your fathers Oldsmobile anymore” 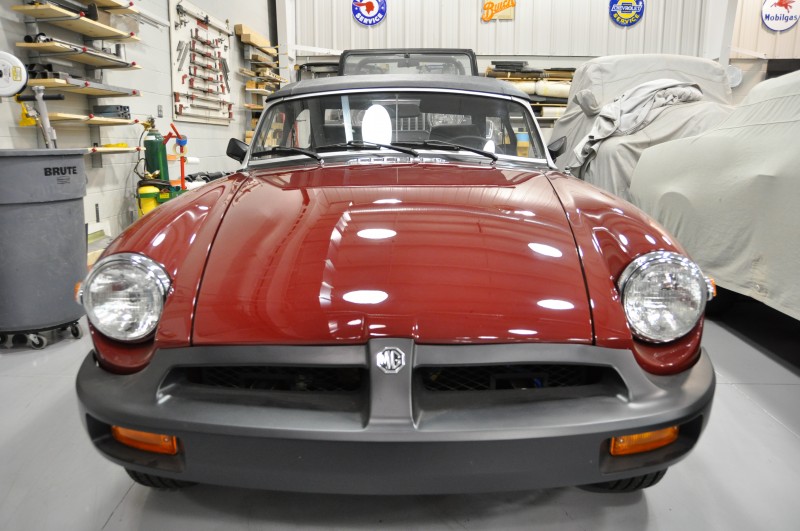 The 1977 MGB was traded in to our Automart store on a new car several years ago and I decided to buy it for a planned restoration. My plan was to restore it for my kids to drive ocassionally in the summer whenever they so desired.

The car was in very poor mechanical and visual condition and required metal repair as well as a complete re-paint. We took the car completely apart and had it media blasted. The drivetrain was in decent shape and only needed a good cleaning and all the gaskets replaced prior to a paint job.

Now the car runs and drives great, not a lot of power but it is adequate to provide some serious fun with the top down and the wind blowing through the cockpit. 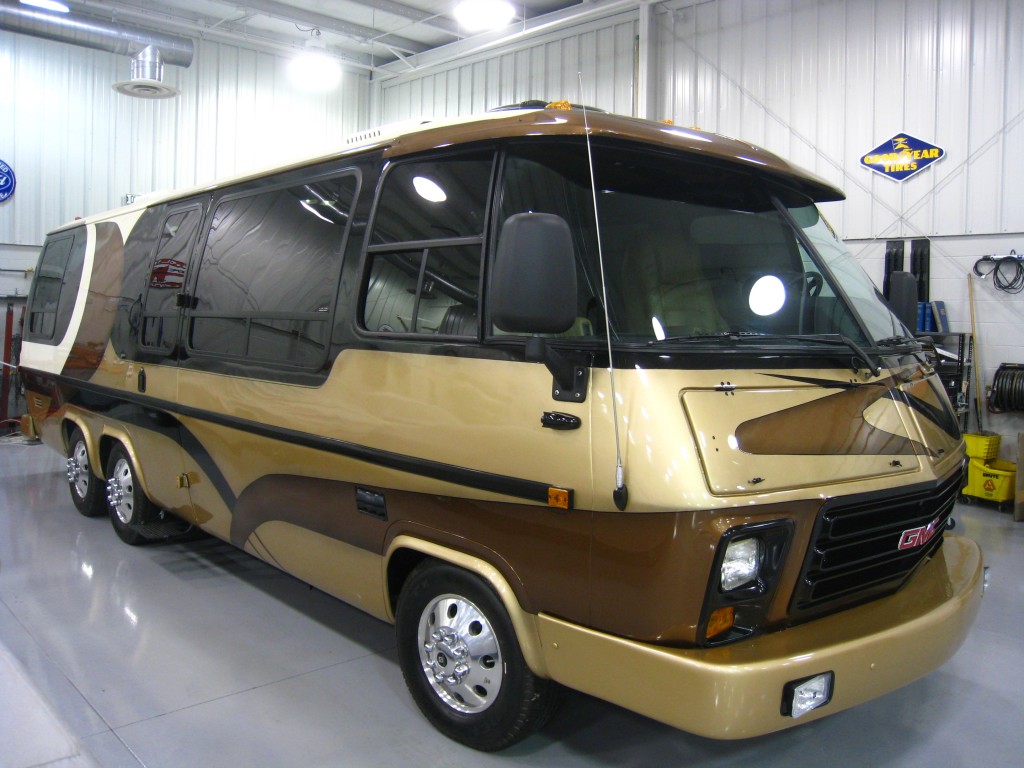 Here’s another project that took on a life of its own.  I purchsed this GMC Motorhome from a gentleman in Atlanta that has a small business of selling GMC Motorhomes. The unit had undergone a re-hab sometime during the previous 5 years but it wasn’t what I wanted. We proded to tear the entire vehicle apart to bare frame, bare walls and not much else. Three years latter, I now have a completely custom 1974 GMC exactly the way I want it. It is a rolling Audio-Visual machine with 5 flat screens, satelte TV, NAvigation, three backup cameras, 12 stereo speakers hooked up to two seperate audio systems. Let’s just say it’s like a man cave on wheels.

There is nothing original about this RV, it’s completely custom from top to bottom and front to back. 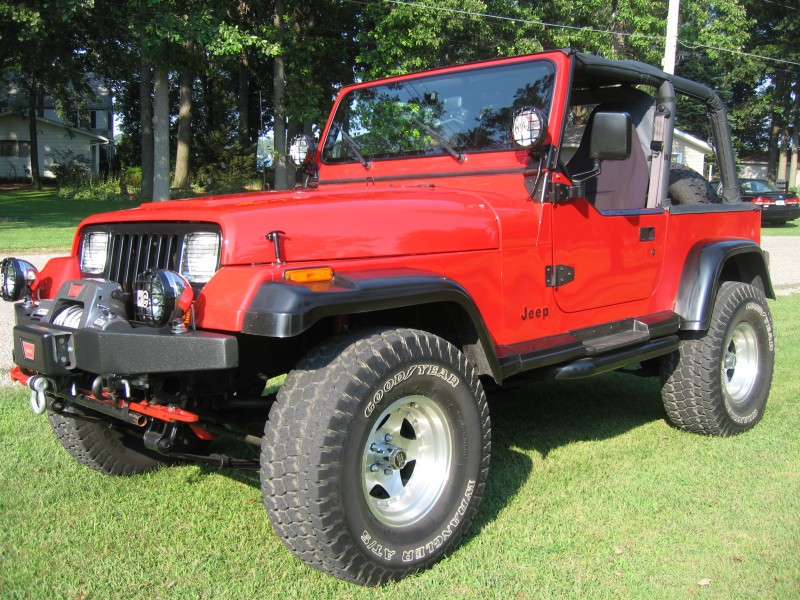 This 1992 Jeep Wrangler was a locally owned car that was traded in to our Jeep Dealership on a new Wrangler. The previous owner had completed some upgrades such as the 3″ lift kit as well as largewr wheels and tires.

After purchasing the Jeep, We embarked on a rehab project that quickly got out of control, it’s just way too much fun to add all the accesories and kits that are available. We repainted the Jeep, installed all blackout trim parts, replaced the stock interior with new carpet and neoprene seats to get things looking good. We have also taken off the factory top and installed a bikini top that remains on year round. We outfitted the Jeep with new front and rear bumpers, a winch as well as a new Sony Explod – 9 speaker stereo system.

This with all the new exterior lights, dual batteries, cold air intake system and performance computer chip make this a great vehicle to drive. It’s all set up to go off road and have the time of your life. This is what Jeeps are all about.